4BC Phil Moroney and Gary Suprain 1973 On record

Thanks to “The Legend” (tagged as Andrews Legends on the mic) himself for these 4BC scoped airchecks, John Brennan also does a liner for the show, well actually it’s Phil, but it will get you too for a second, enjoy “On Record” showcasing the events and music of 1973.

As this was a large file  here’s part one weighing in at 5.26MB

Btw, who else recalls Gary Suprain as the 3XY guy and the guy who set up Darwins First FM Rock station HOT 100 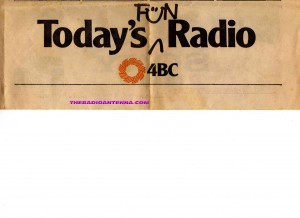