The Wheel on the radio turns with Rob Elliot, here he is on Melbournes re-jigged FOX when they became a Classic Rock radio station the format lasted about 3 years before they reverted to the Rock/Pop music, Phil O’Neill scored this gig strangely enough as it was rating well but thats radio, nothing ever makes sense, does it , like the last guy on here, wants 7 seconds by that’ll do, a nighty night song, there was an annoying clown that would call in for Zeppelin but at least he knew the format, here’s Trampled Underfoot 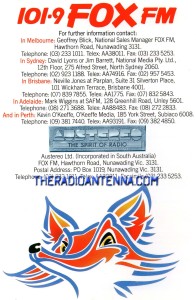